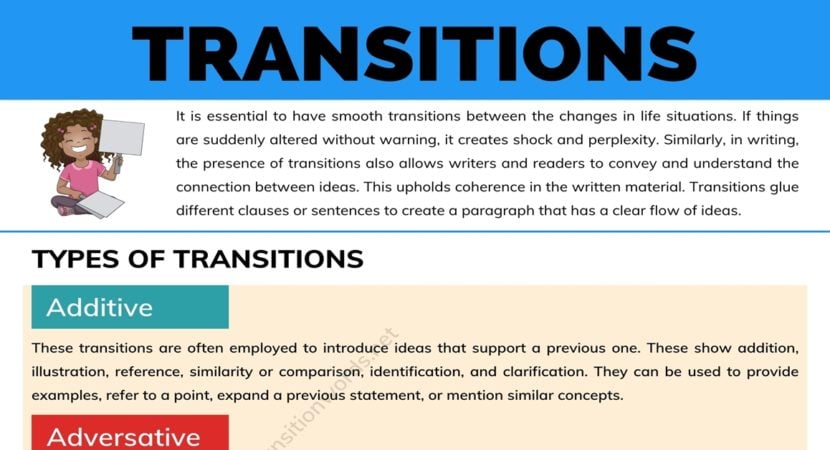 Transitions are words, phrases, sentences, or paragraphs that promote a logical connection between conveyed ideas. They are used to either support, negate, introduce examples, or provide results or reasons to the idea expressed before them. This article shall focus on the importance, types, and examples of transitional expressions that can be helpful to your writing and vocabulary skills.

It is essential to have smooth transitions between the changes in life situations. If things are suddenly altered without warning, it creates shock and perplexity. Similarly, in writing, the presence of transitions also allows writers and readers to convey and understand the connection between ideas. This upholds coherence in the written material. Transitions glue different clauses or sentences to create a paragraph that has a clear flow of ideas. They are not employed as mere decorations to make your essay sound better. They are essential parts of speech that create a relationship between the relayed thoughts. The use of appropriate transitional words or phrases prevents sudden leaps between the information in a sentence or paragraph. Without transitions, you’re text or material will sound monotonous or confusing. This is more specifically vital in academic or professional writing, where you have to effectively convey the information or idea to the reader. There are many types of transitions, and each offers a distinct purpose that will be discussed in the next section.

Transitions can be divided according to many categories. One of which is by its purpose or how it is used in the text. Here are the descriptions of the types of transitions according to their purpose.

Transitions can either be words, phrases, sentences, or even paragraphs. That being said, these speech devices can also be categorized according to where you place them in the text. Below are the types of transitions according to placement.

As you may have observed, most of the mentioned transitional expressions are conjunctions, prepositions, or adverbs. However, these parts of speech can be transformed as transitions if they connect ideas to create a smoother and more comprehensive flow. The choice of which term or phrase to be used is crucial to present the thought clearly. View the list above whenever you need to identify which transition suits your text the most.