Home
Conclusion Transition Words
Other Ways to Say To Sum up : List of 25+ Synonyms for To Sum up with ESL Pictures 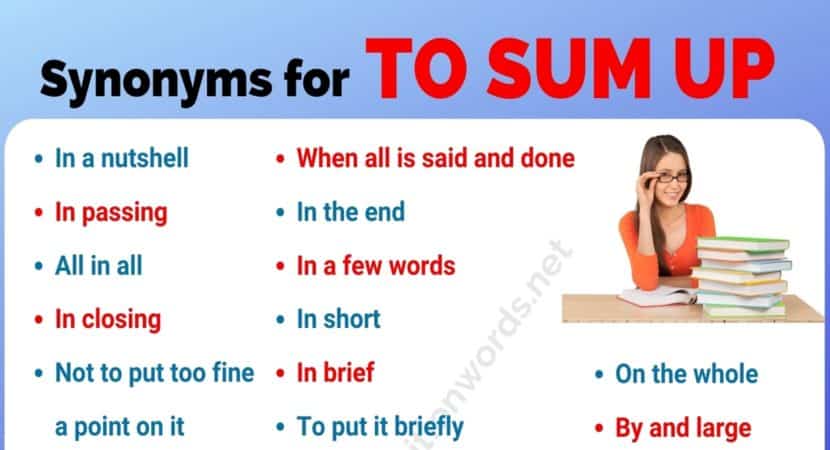 To sum up Synonym! What is another word for to sum up? List of 30+ helpful synonyms for to sum up with example sentences. Learn these to sum up synonyms to improve your vocabulary and your writing skill in English.

To Sum Up Synonym

Learn a useful list of 30+ synonyms for to sum up in English.

Another word for To Sum up| Infographic 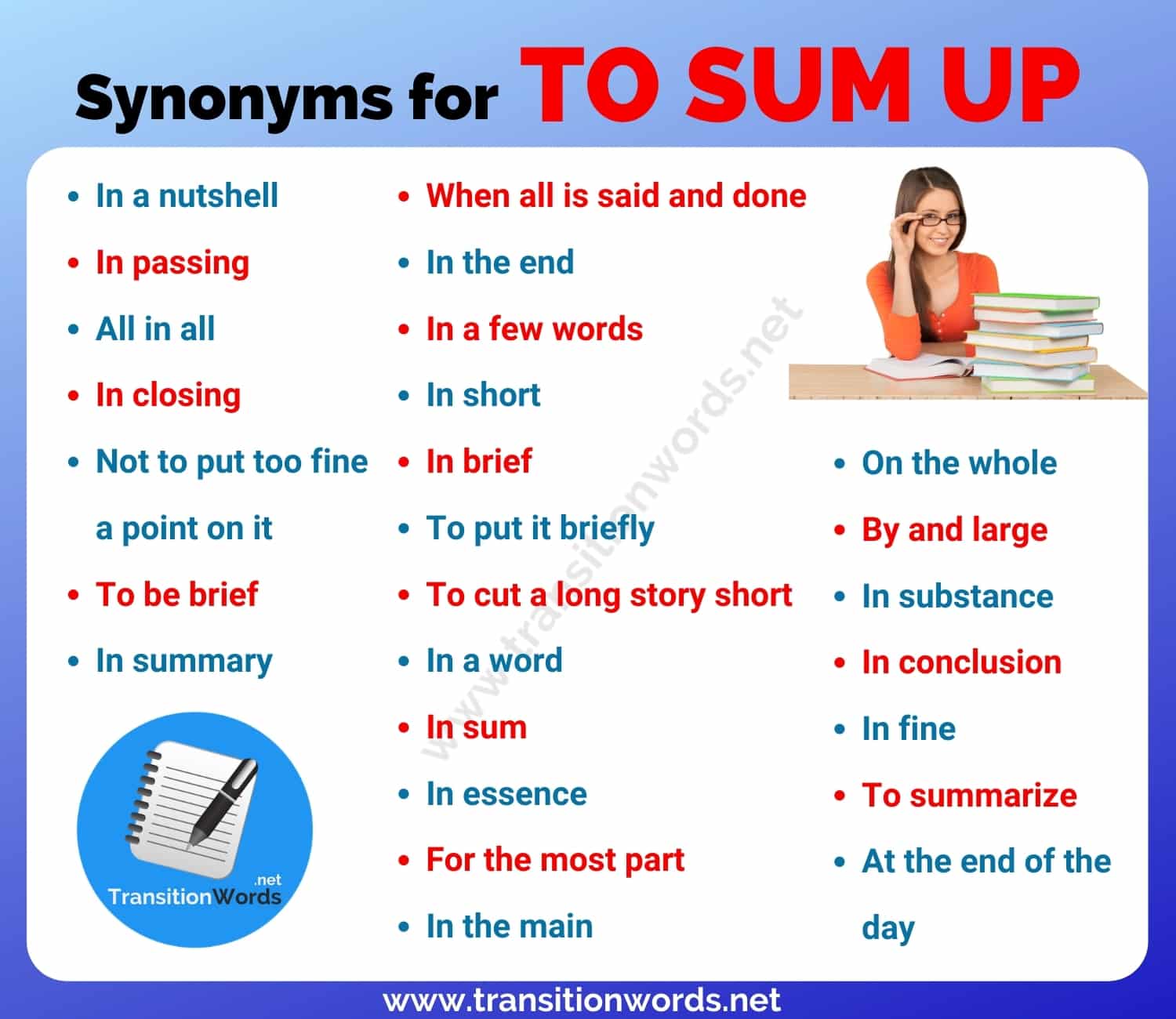 Other Ways to Say To Sum Up

To Sum Up Synonyms with Examples

Learn another word for to sum up with example sentences.

In a nutshell, the owners thought they knew best.

In passing, I might say how extraordinarily lucky I am to have them here with me.

All in all, it adds up to a pretty desperate situation.

To be brief, I’ll explain only the most important points.

Not to put too fine a point on it, I think you are lying.

In summary, this was a disappointing performance.

At the end of the day, it’s his decision.

In a few words, she had put him in his place.

In short, we must be prepared.

In brief, I have made up my mind to quit the job.

There is, to put it briefly, a plethora of offerings to which the term theory has been applied in sociology.

To cut a long story short, he threw them out of the house.

In a word, the whole plan fell through.

In sum, we have no chance of winning the case.

In essence, your situation isn’t so different from mine.

For the most part, people seemed pretty friendly.

On the whole, I prefer dry wines to sweet ones.

By and large, I enjoyed my time at school.

It was, in fine, a fitting end to the story.

To summarize, in most cases the schools were achieving the standards set.

Other Ways to Say To Sum Up with Examples | Infographic 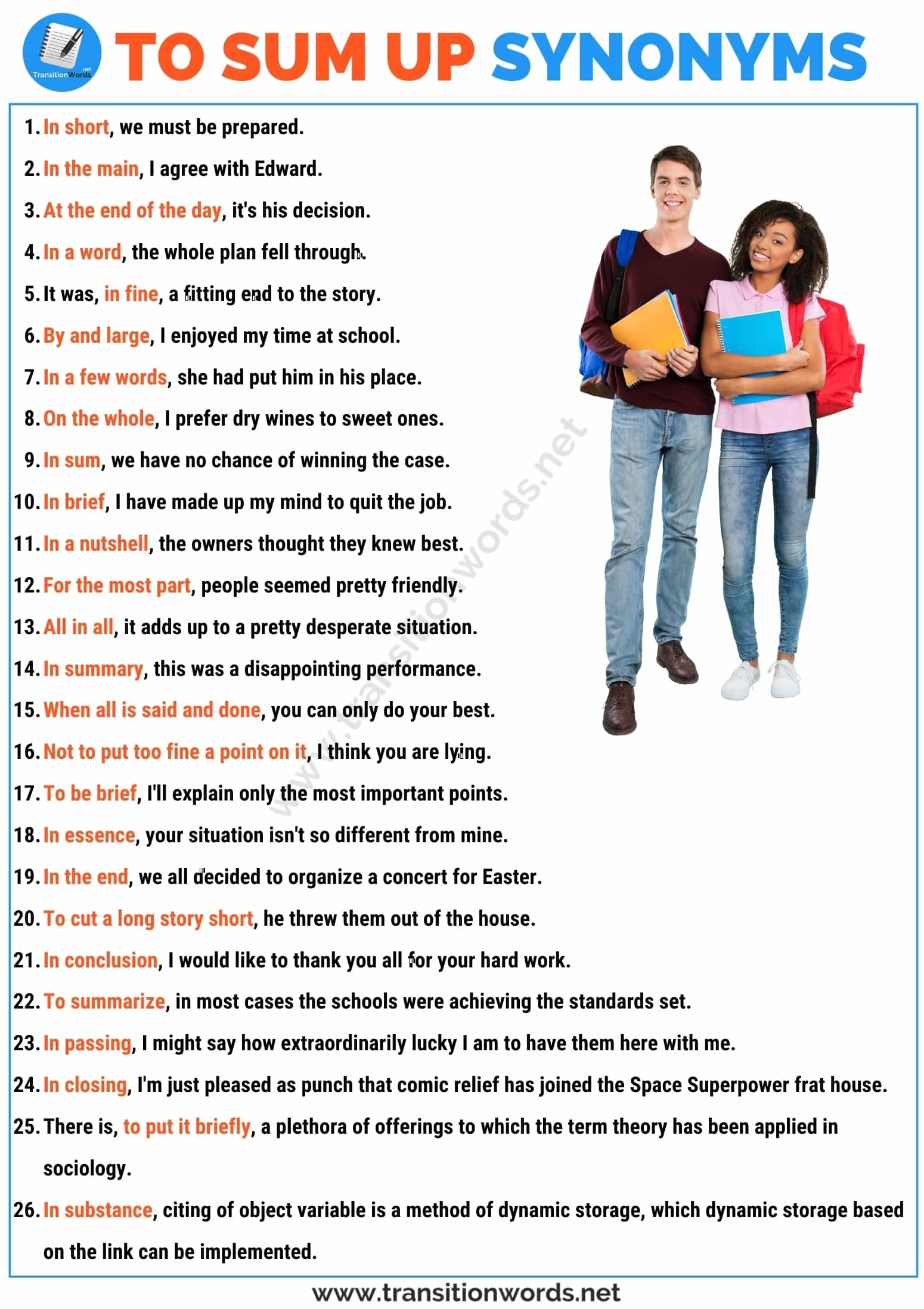