Home
Conclusion Transition Words
Another Word for In The End: List of 25+ Synonyms for In the end with Useful Example Sentences 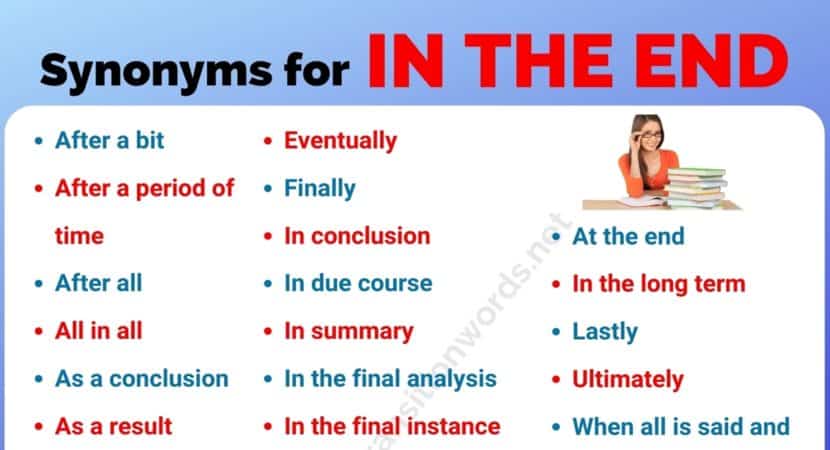 In the end Synonym! What is another word for in the end? A useful list of 26 synonyms for in the end with useful example sentences and ESL pictures. Learning these “in the end synonyms” will surely help you broaden your vocabulary words and improve your writing skill in English.

In the end Synonym

“In the end” is a conclusion transition word in English. Learn a useful list of synonyms for in the end in English.

Another Word for In the end | Infographic 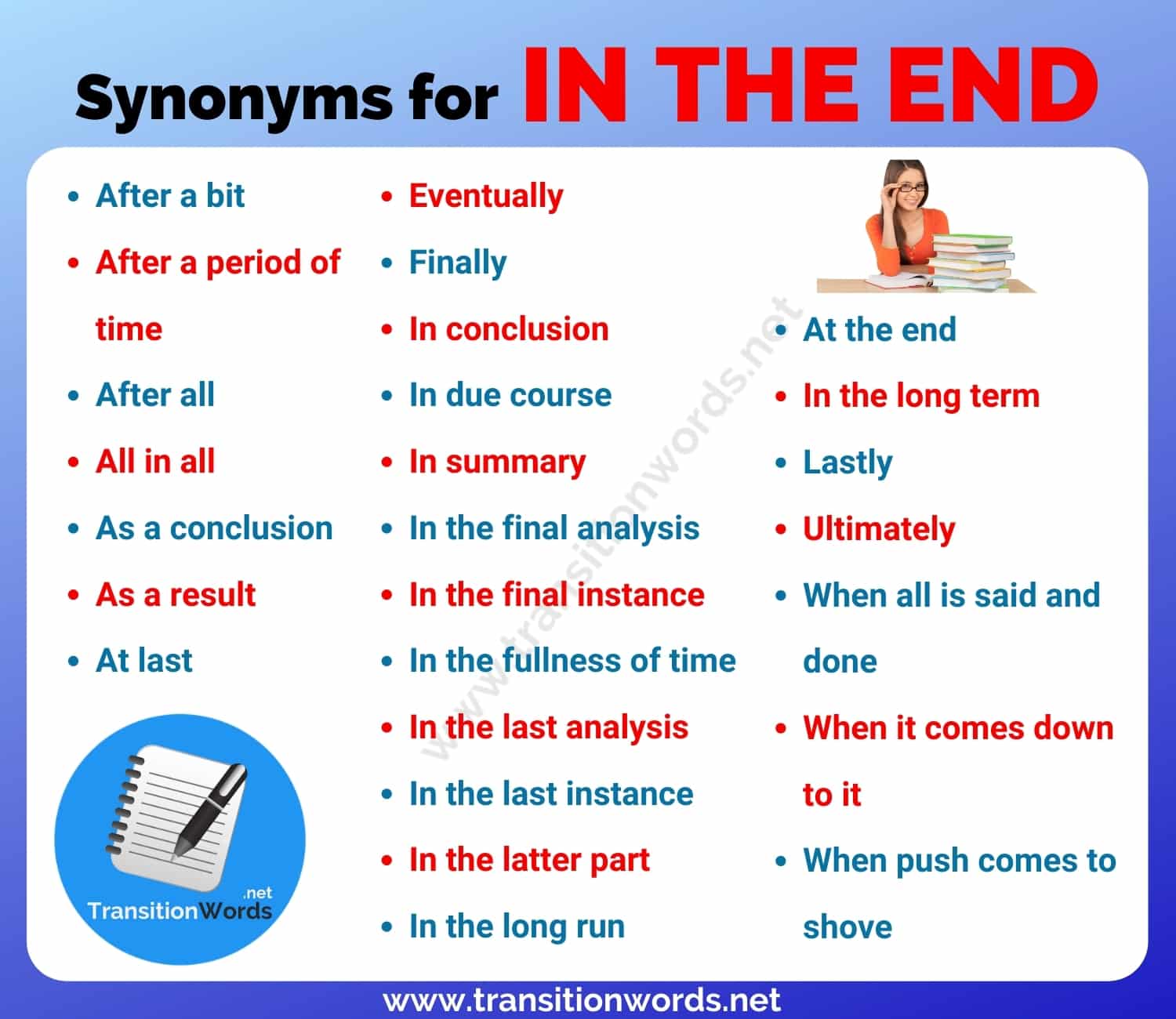 Another Word for In the end

In the end Synonyms with Examples

Learn another word for in the end with example sentences.

After a bit, they moved over to the bed.

After a period of time, I come back to Jason to see how he is progressing.

The world is but a little place, after all.

All in all, it had been a not untypical day.

As a conclusion, Microsoft Universal Printer Driver is feasible and efficient for PLW printer driver development.

Even at the end, when cancer racked his body, he was calm and cheerful.

Eventually, Roberto backed down and apologized.

Finally, the two of us were alone together.

In due course, the baby was born.

In summary, governments have many reasons for spending so much on defence.

In the final analysis, the project was a failure.

But in the final instance, these short-run goals are pursued with a green glinted eye focused on long-run profitability.

In the fullness of time, they married and had children.

In the last analysis, it is illogical because it is self-contradictory.

In the last instance, it views feminist politics as an elaboration of biology.

In the latter part, we concentrate on the relation between the Principle of Least Effort and pragmatics theories.

In the long run, it works out more expensive to rent a television than to buy one.

In the long term, our efforts will pay off.

Lastly, I’d like to ask you about your plans.

Ultimately, their ideas amount to the same thing.

When it comes down to it, we can’t afford to go.

When push comes to shove, you are on your own.

Another Word for In the end with Examples | Infographic 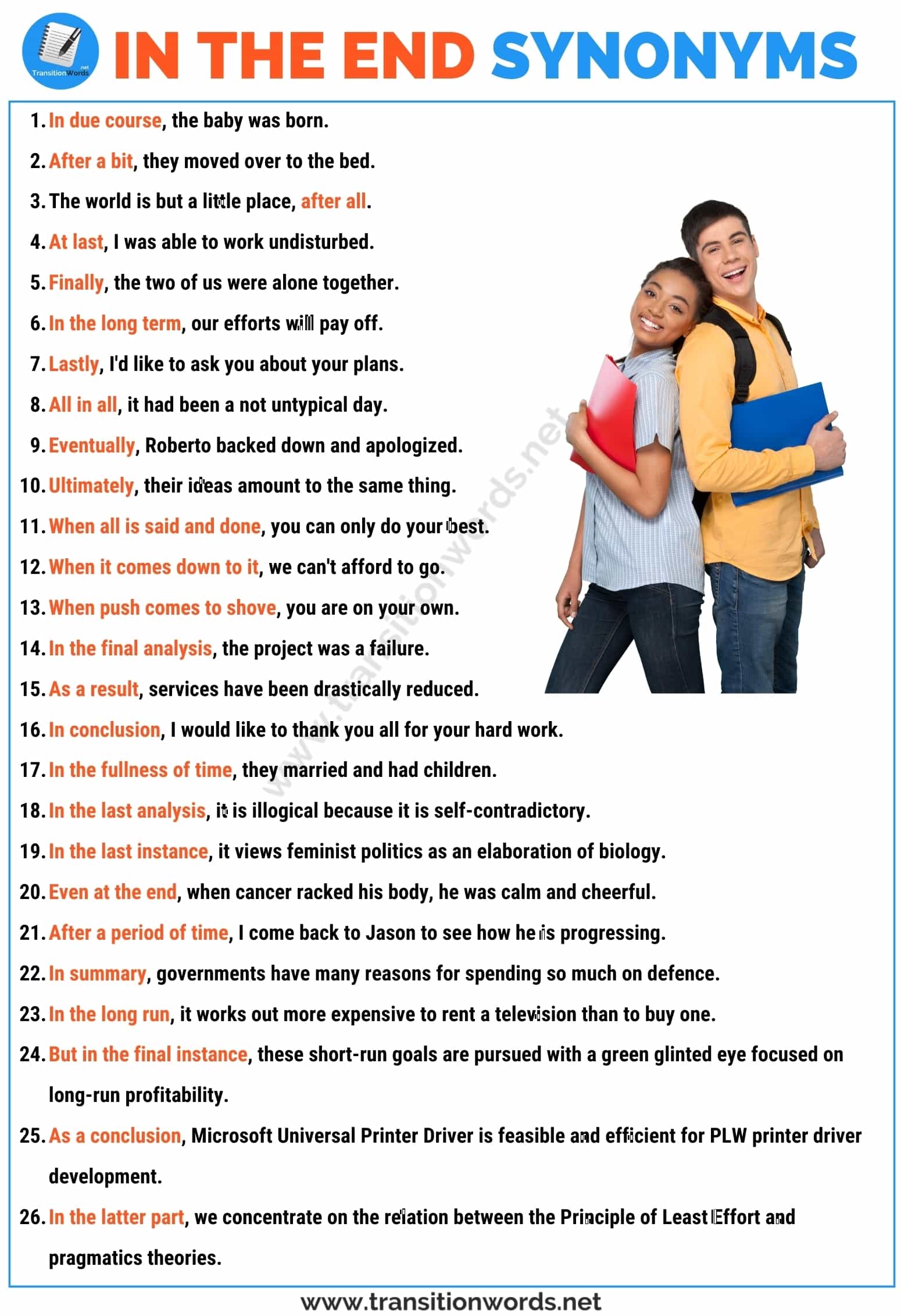