Home
Conclusion Transition Words
Other Ways to Say IN CONCLUSION: List of 30 Synonyms for In Conclusion with Useful Examples 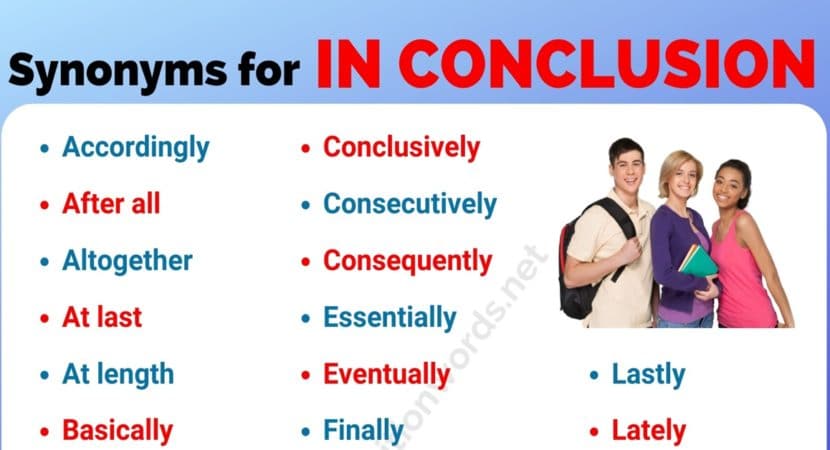 Learn a useful list of synonyms for in conclusion in English.

Other Ways to Say In Conclusion | Infographic 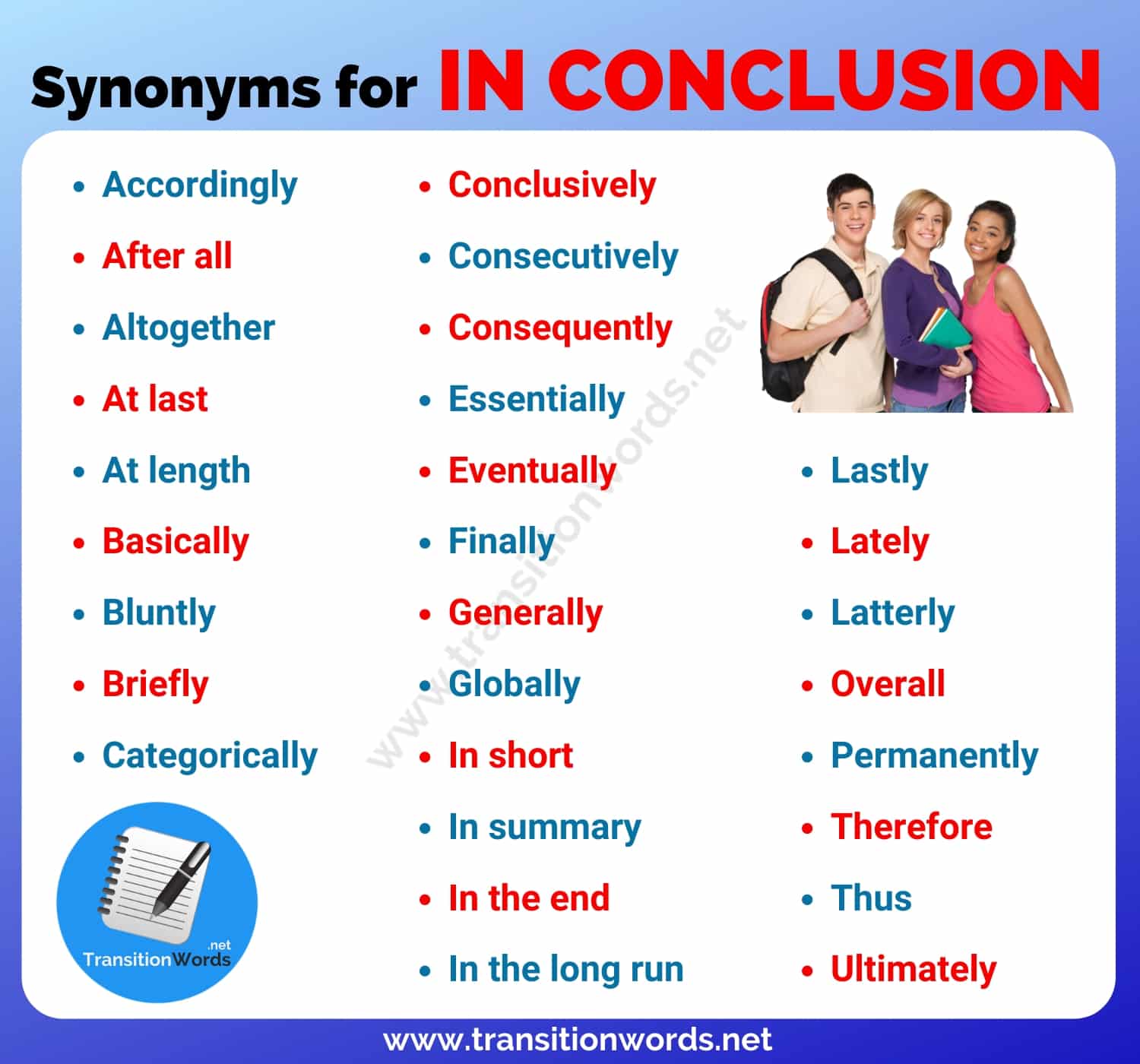 Other Ways to Say In Conclusion

In Conclusion Synonyms with Examples

Learn another word for In Conclusion with example sentences.

She complained of stiffness in her joints. Accordingly, she was admitted to the hospital for further tests.

Coming days would be long. After all, do not grow, grey-haired.

All in all, her condition is greatly improved.

At last, she realized her dream of becoming an actress.

At length, the young lady raised her head and looked steadily at his intelligent face.

Basically it was a fine performance I have only minor quibbles to make about her technique.

Briefly, she ran through details of the morning’s events.

He answered the other side’s questions categorically.

Conclusively it is significant to develop a descendent blood fat drug from onion oil.

Each pad has an identifying number, and each check is numbered consecutively.

Consequently, he could see making car-purchasing a joint effort as an expression of love.

Eventually, the government was forced to bow to public pressure and reform the tax.

Finally, he returned to the official line from which he had swerved.

The company has to be able to compete globally.

Try tennis, badminton or windsurfing. In short, anything challenging.

In summary, it is my opinion that this complete treatment process was very successful.

In the long run, it works out more expensive to rent a television than to buy one.

Lately, I’ve been toying with the idea of going back to school.

Latterly, her concentration hasn’t been so good.

In fact, at present much land taken for chalk extraction is lost to agriculture permanently.

Therefore, he went to work in an architect’s office in order to learn how to design buildings.

Ultimately, the decision rests with the child’s parents.

Other Ways to Say In Conclusion | Infographic 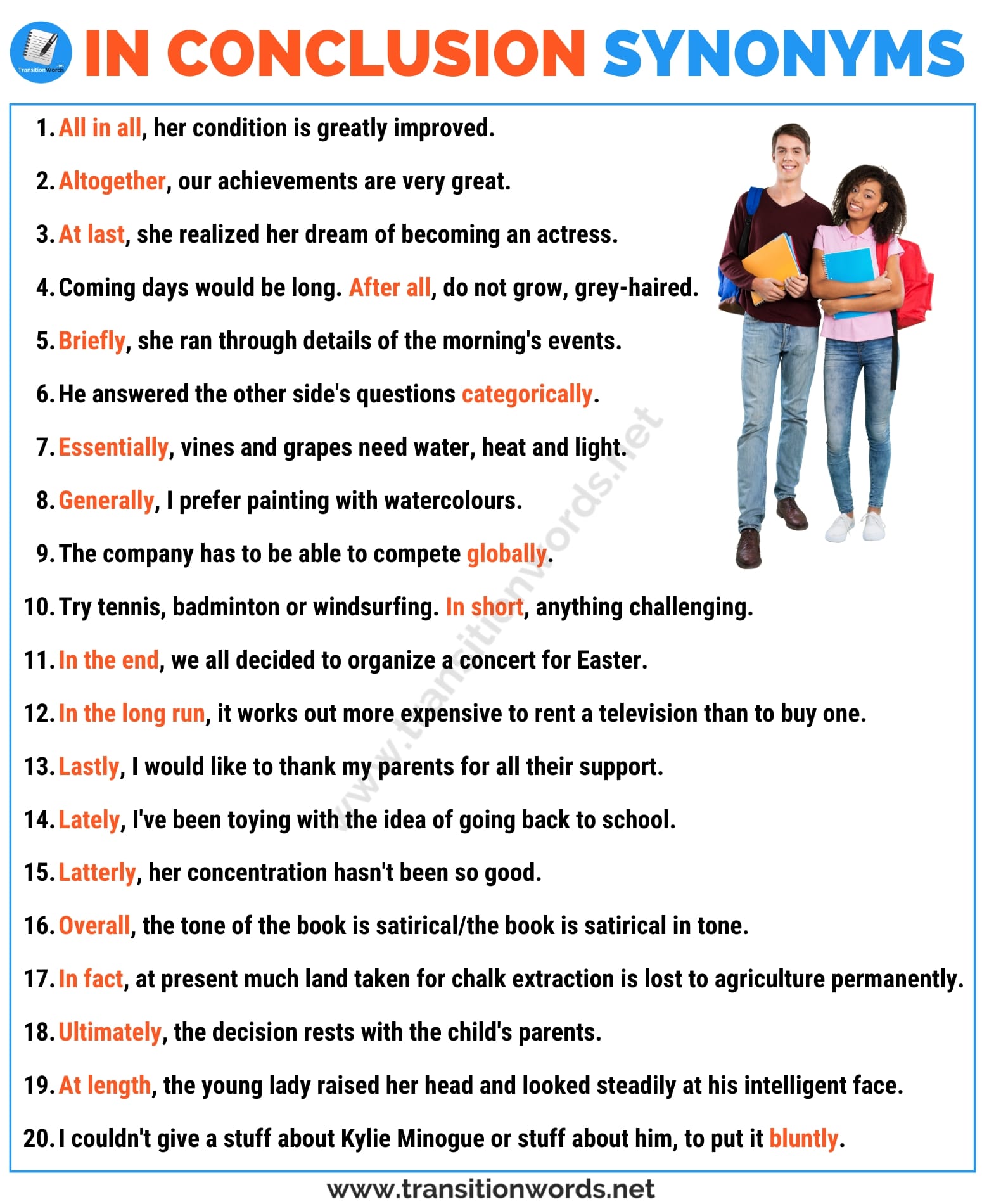