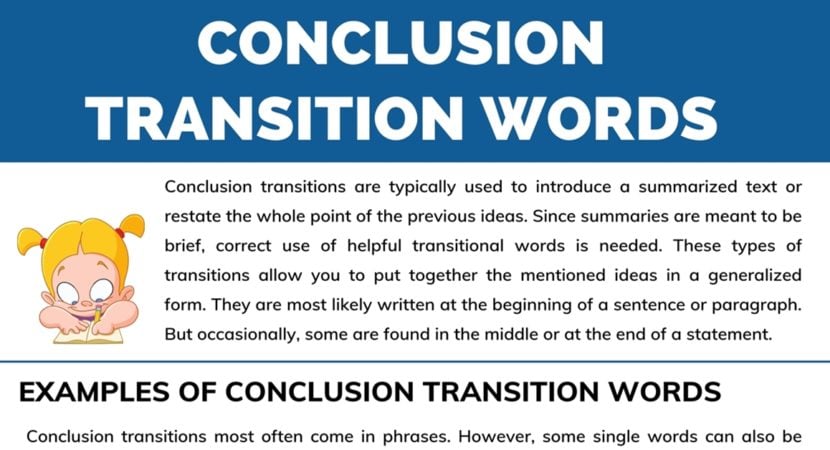 Transitions, in general, are parts of a speech that link one idea to another to achieve a smoother connection. They’re essential in presenting a logical relationship between concepts in a text. Transitional words can either be additive, adversative, causal, or sequential. A type of transition that falls under the sequential category is the conclusion transition words. When writing an essay or article, ending the whole text with a powerful conclusion creates an impact on the readers. It helps you summarize the entire essay clearly and concisely. It provides closure to the readers and reminds them of the key points that they have to remember. To effectively write a conclusion, you’ll need appropriate conclusion transition words. This helps you deliver the take away of the content in a polished manner.

Conclusion transitions are typically used to introduce a summarized text or restate the whole point of the previous ideas. Since summaries are meant to be brief, correct use of helpful transitional words is needed. These types of transitions allow you to put together the mentioned ideas in a generalized form. They are most likely written at the beginning of a sentence or paragraph. But occasionally, some are found in the middle or at the end of a statement. There’s a long list of conclusion transition words and phrases that you may use to effectively create your conclusion. A broad vocabulary of such terms is beneficial to avoid redundancy and monotony. The next section shall enumerate the most common transitions used in writing a conclusion.

Conclusion transitions most often come in phrases. However, some single words can also be used. All of which aim to start or accompany a statement that expresses a generalized or final thought. Feel free to go through the succeeding list of transition words and phrases. Sample sentences are also provided to show how the conclusion transitions are used.