Home
Conclusion Transition Words
Other Ways to Say All in all: List of 25+ Synonyms for All in all with Useful Examples 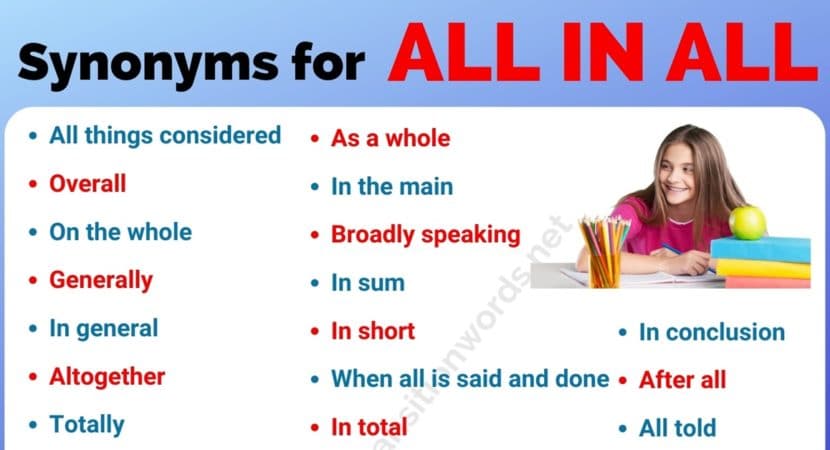 All in all Synonym! What is another word for all in all? A useful list of 13 synonyms for all in all with useful example sentences and ESL pictures. Learning these “all in all synonyms” will surely help you broaden your vocabulary words and improve your writing skill in English.

All in all Synonym

“All in all” is a conclusion transition word in English. Learn a useful list of synonyms for all in all in English.

Another Word for All in all | Infographic 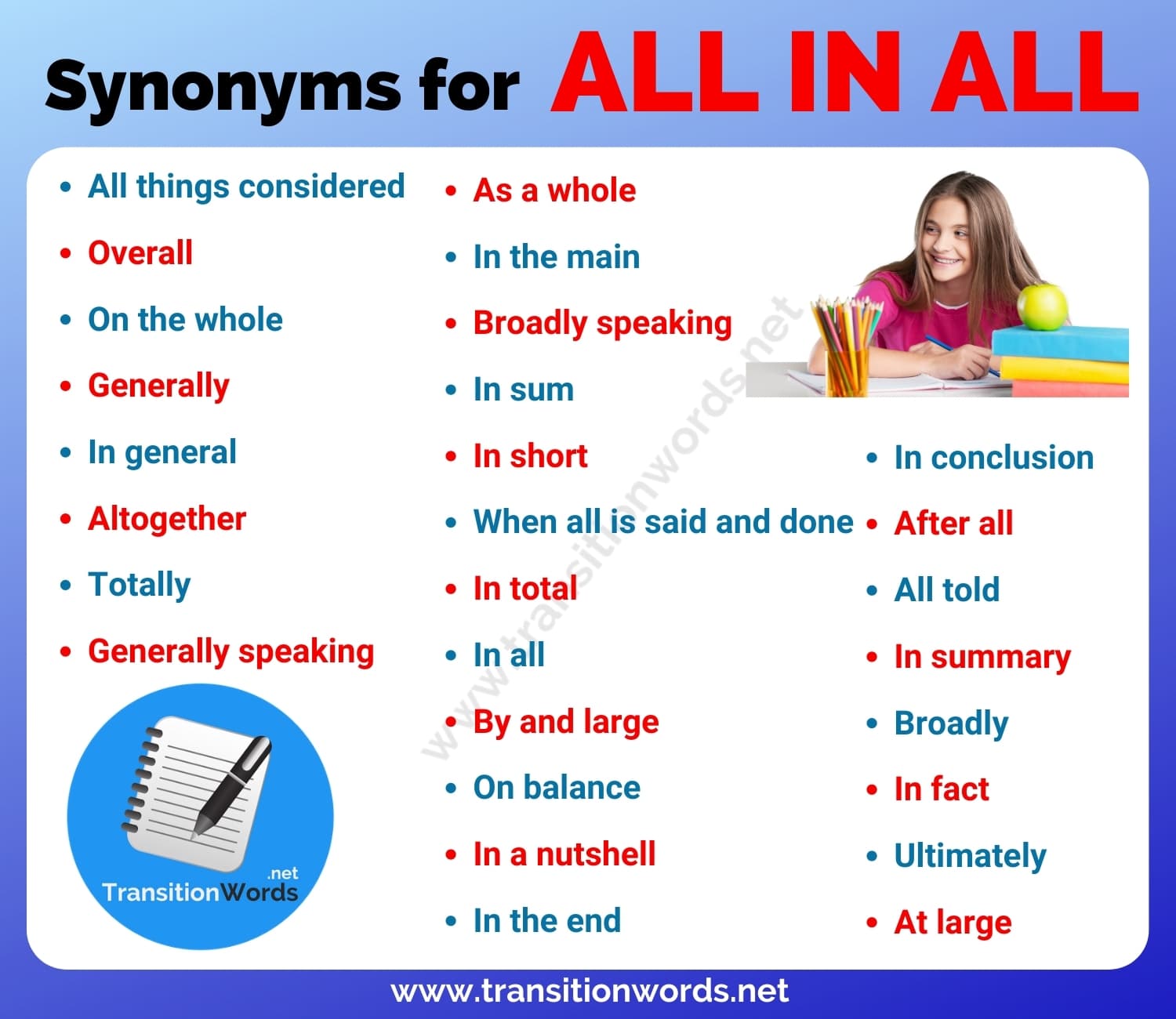 Other Ways to Say All in all

Other Ways to Say All in all with Examples

Learn another word for all in all with example sentences.

I mean, nuns have to drink somewhere. All things considered, I reckoned two out of three wasn’t bad.

Those in business are not, on the whole, conversant with basic scientific principles.

In general, employers do little to help a single working mother.

The claims are, I repeat, totally unfounded.

Generally speaking, the more expensive the stereo, the better it is.

Broadly speaking, the cultures of the two countries are very similar.

In short, the style concerns not what a writer says but how he says.

She doesn’t have a lot of experience but, when all is said and done, she’s the best person for the job.

In total, the committee suggested improvements generating $ 2 million in savings over the first two years.

On balance, the company has had a successful year.

Unemployment is rising, prices are increasing; in a nutshell, the economy is in trouble.

In conclusion, I hope the preceding arguments have convinced you of the need for action.

All told, these costs can readily explain the large differential in prices.

In summary, it is my opinion that this complete treatment process was very successful.

Broadly, it makes connections between ideas about healing and how they link to plants.

He’s not at all exciting, in fact, he’s really rather commonplace.

Ultimately, the war had to end; it cost too much in both lives and dollars.

Other Ways to Say All in all with Examples | Infographic 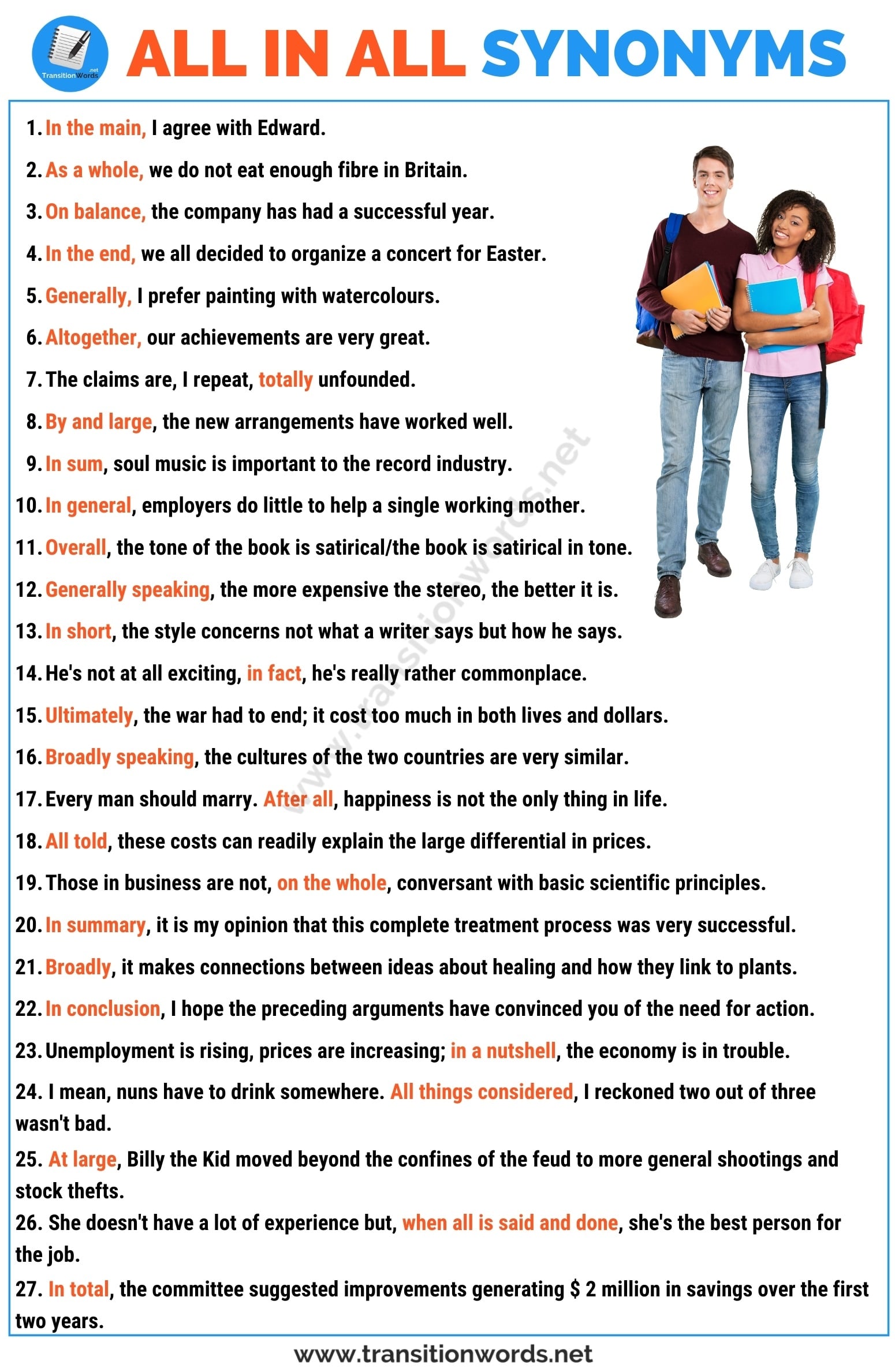