Home
Uncategorized
Other Words for AGAIN Synonym: 30 Helpful Synonyms for AGAIN with Examples 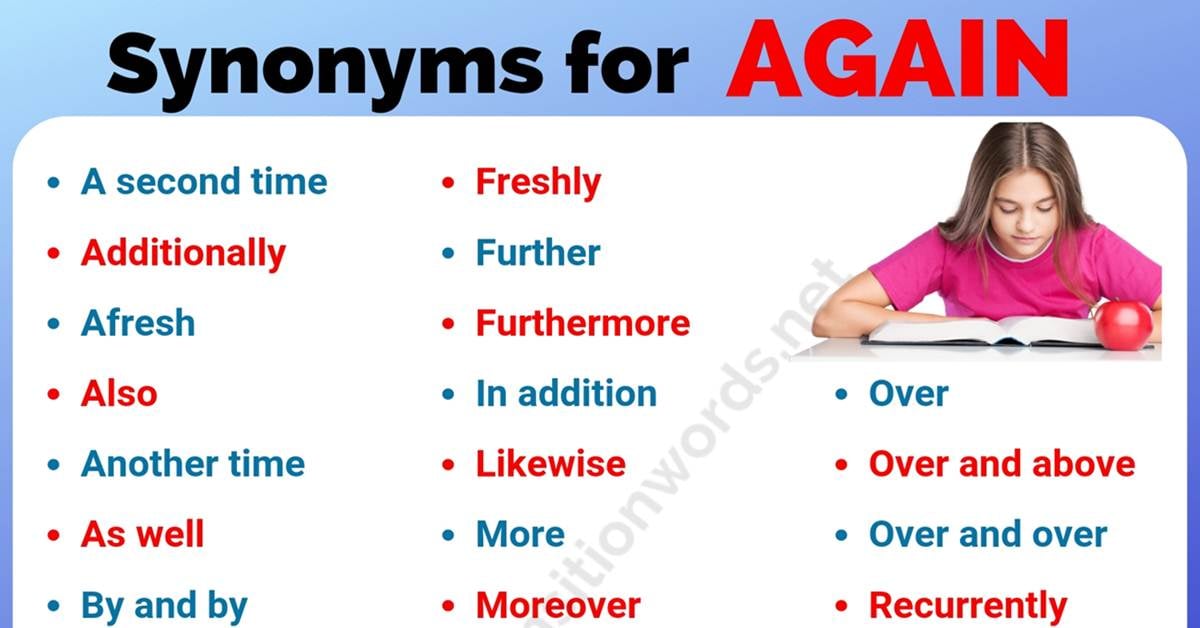 Again Synonym! What is another word for again? Helpful list of 30 synonyms for again with example sentences and ESL pictures. Learn these again synonyms to improve your vocabulary and your writing skill in English.

Learn a useful list of 30 again synonyms in English.

Let’s learn the list of transition words in English.

Another word for Again | Infographic 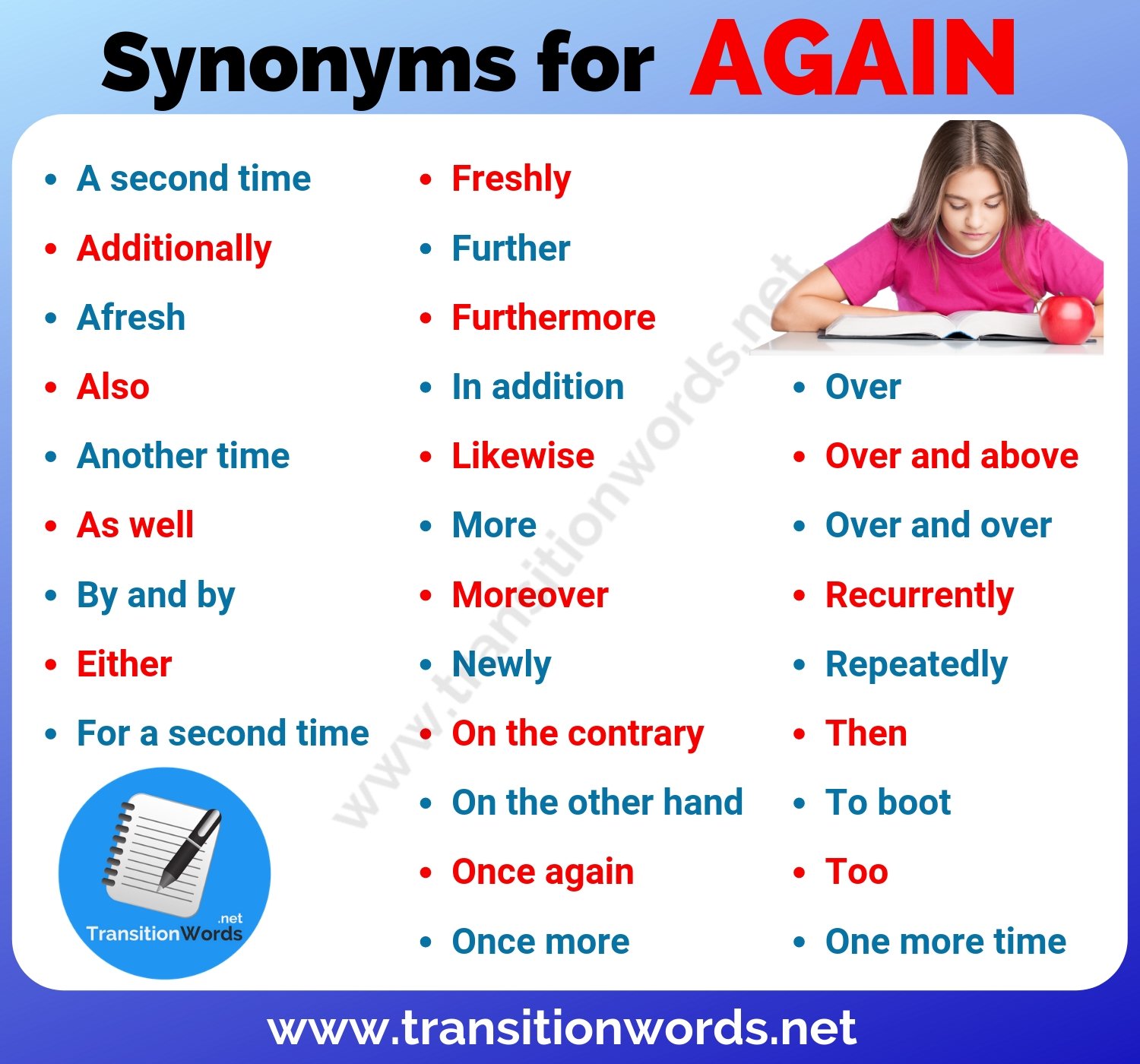 Other Words for Again

Learn another word for again with example sentences.

He read the completed draft through slowly a second time.

Additionally, the bus service will run on Sundays, every two hours.

She tore up the letter and started afresh.

Thank you, so busy, also come to hurt me.

Not to worry, we can always go another time.

There’s something else I’d like to talk about as well.

Summer vacation will come by and by.

They aren’t the best team in the league, but they’re no pushover, either.

He was targeted by terrorists for a second time last night.

The rooms had all been cleaned and freshly aired.

I have no desire to discuss the matter further.

I don’t want to go there, furthermore, I have no time to do so.

In addition, students can take classes in word-processing and computing.

Watch him and do likewise.

Moreover, prosecutors argued successfully that Lee should not be released on bail.

“Social confidence for the newly single”

On the contrary, they were getting better all the time.

On the other hand, no new direction was immediately apparent.

I’d like to visit the colleges once more before we leave.

Once again I went over exactly what I needed to say.

I’ll take you through it one more time, then you can try it yourself.

Please think over what I’ve said.

He had some repairs to pay for over and above the cost of the car.

Over and above, these industry-based calculations hangs the larger strategic concept for the advantage to the nation as a whole.

It will become persistent, more and more severe as the disease recurrently attacks.

The loudspeakers blared the speech repeatedly.

Then, they told him dinner would be served directly and he replied that they could not serve it too quickly to suit his convenience.

To boot, the wind in the Sounds is gusty.

Synonyms for Again with Examples | Infographic 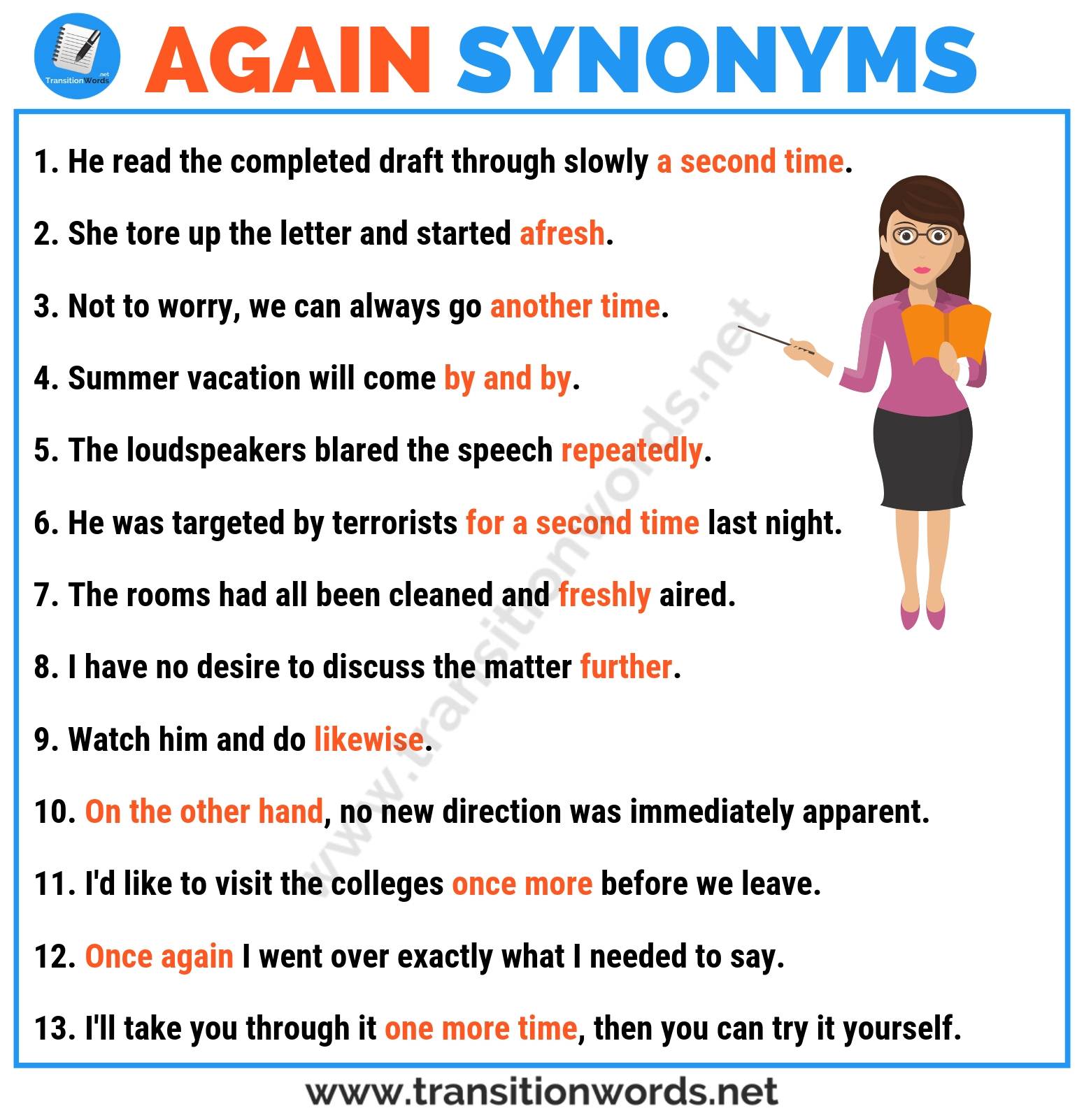