Home
Conclusion Transition Words
Other Ways to Say After all: List of 40 Synonyms for After all with ESL Picture 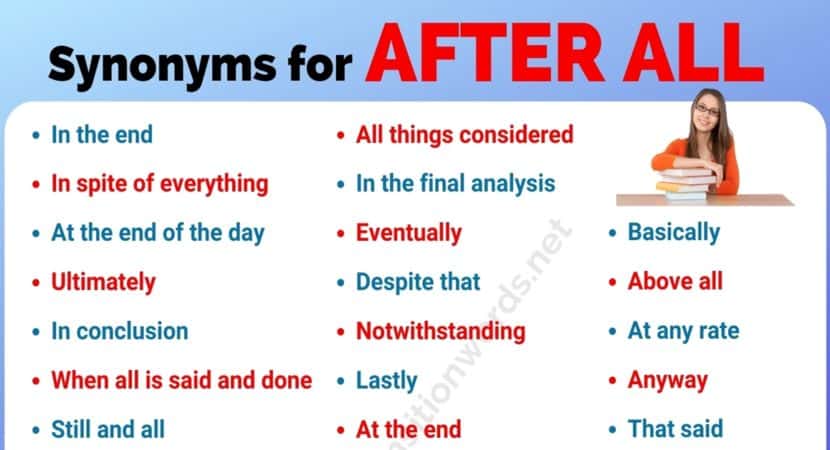 “After all” is a conclusion transition word in English writing. Learn a useful list of synonyms for after all in English.

Another Word for After all | Infographic 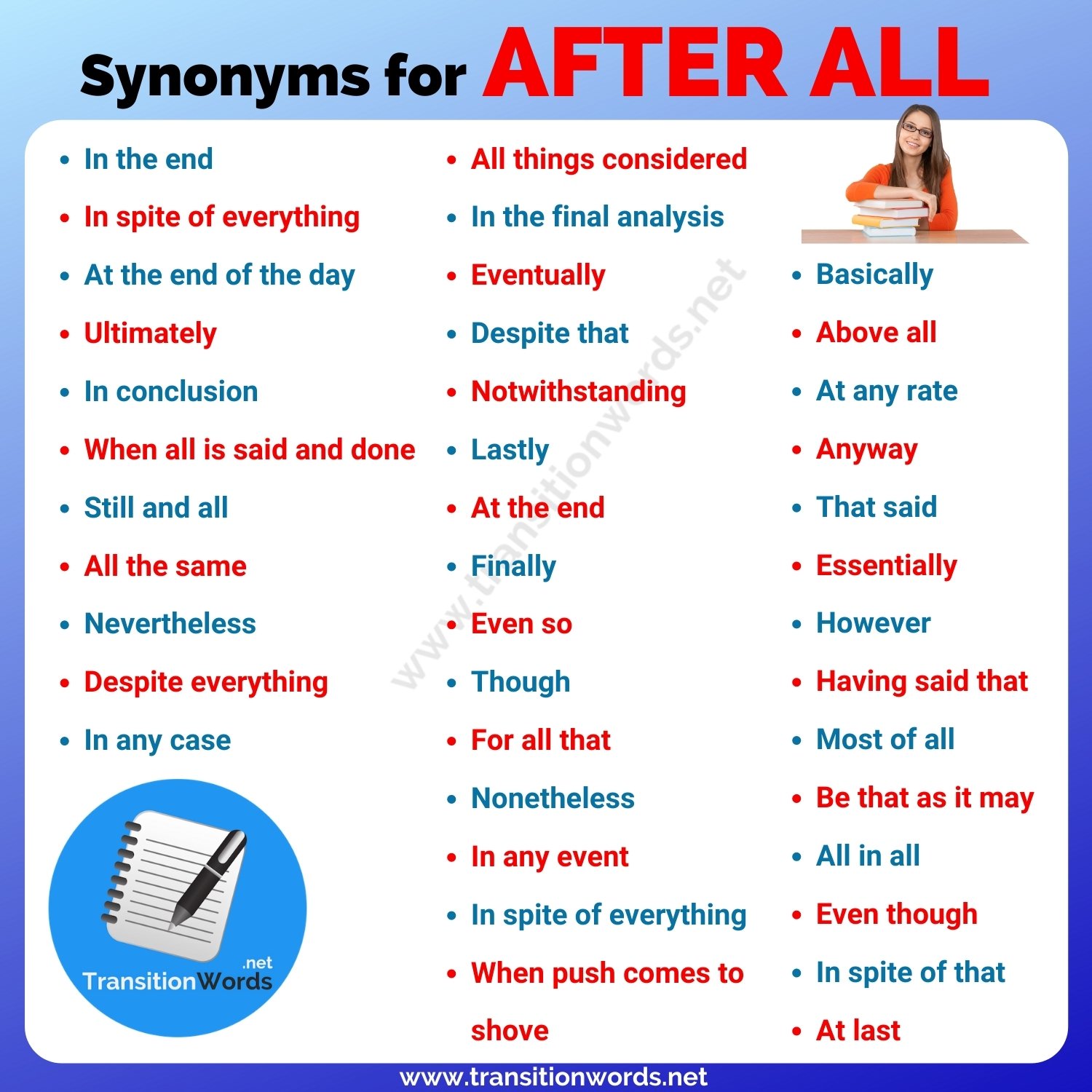 Other Ways to Say After all

Other Ways to Say After all with Examples

Learn another word for after all with example sentences.

In spite of everything, I still believe that people are really good at heart.

At the end of the day, he’ll still have to make his own decision.

Ultimately, all the colonies will become independent.

In conclusion, I would like to say how much I have enjoyed myself today.

Still and all, these are familiar, far-from-fatal flaws typical of a first feature.

All the same, there’s some truth in what she says.

Nevertheless, the article provoked an avalanche of reaction.

Despite everything, she bore her former boss no animosity.

In any case, work in Hamburg is proceeding apace.

All things considered, I’m sure we made the right decision.

In the final analysis, I think our sympathy lies with the heroine of the play.

Eventually, the star attained the velocity of light.

Despite that, many in the industry reckon Daimler’s biggest troubles may still be ahead.

Notwithstanding she is beautiful, she doesn’t think it goes for much.

At the end, he nursed Lilly and cleaned up after her without minding.

When push comes to shove, you are on your own.

Finally, they arrived at the safety zone.

Even so, any extra overhead is hardly noticeable.

Though she’s almost 40, she still plans to compete.

For all that, observers are unanimous that Swapo will emerge with a clear majority.

There are serious problems in our country. Nonetheless, we feel this is a good time to return.

In any event, the bowling alley restaurant proved quite acceptable.

Basically, the article can be summarized in three sentences.

In spite of everything, Robyn’s managed to keep her sense of humour.

At any rate, your plan needs revision.

Anyway, let’s forget about that for the moment.

This is a cheap and simple process. However, there are dangers.

Having said that, I agree with your other point.

Most of all, he desires to make an intelligent presentation.

Be that as it may, terrible things clearly happened.

All in all, I think you’ve done very well.

Even though he’s old he’s game for anything.

In spite of that, when they arrived, the place took hold of her.

Other Ways to Say After all with Examples | Infographic 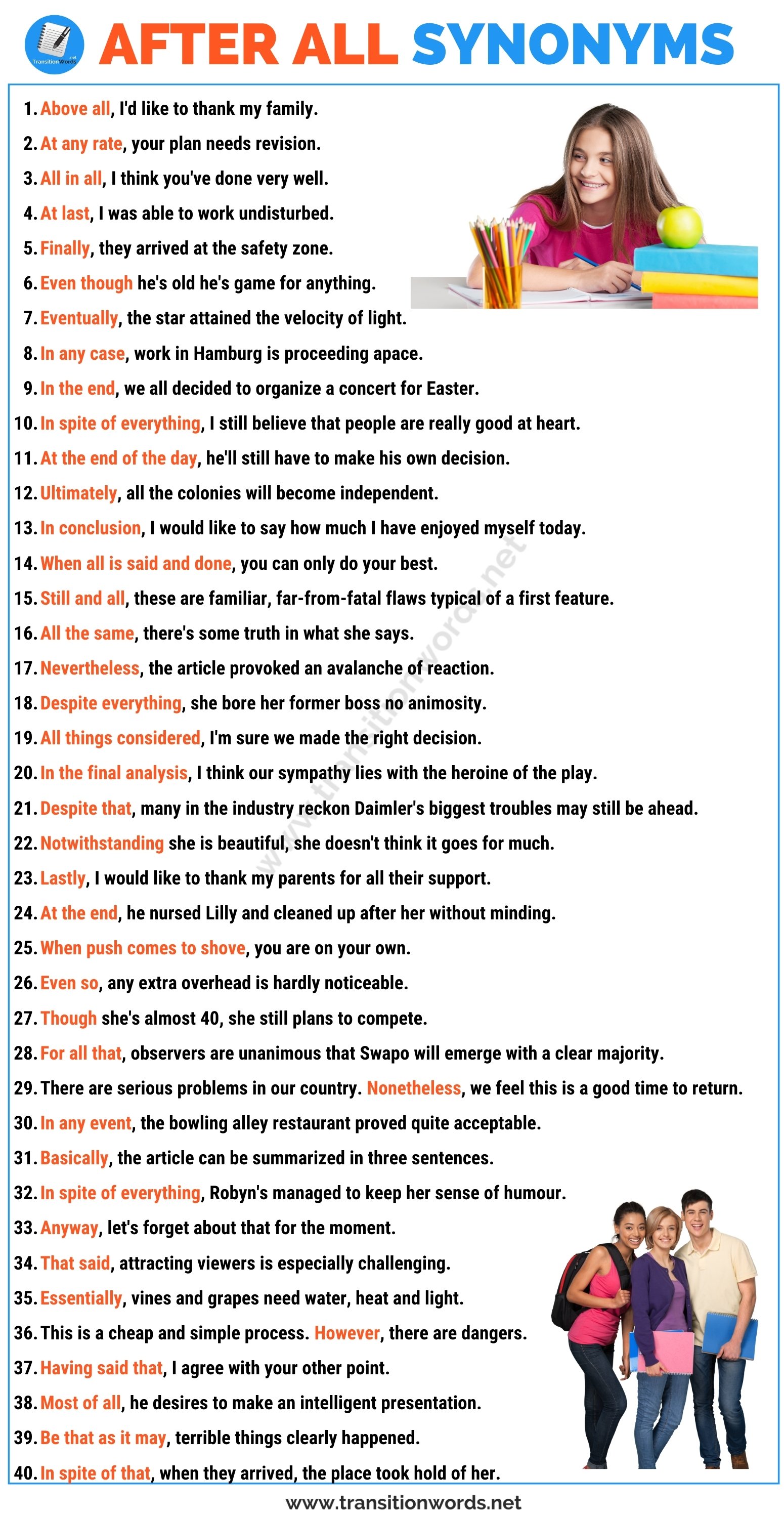